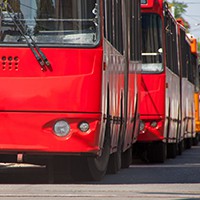 Did You Know? Credits for Transit Costs Still Claimable

The Public Transit Tax Credit has been eliminated by the federal government. But did you know that in Ontario, seniors who have reached age 65 by December 31, 2017, can claim a full-year credit on the 2018 tax return? Even better news: it’s refundable!

A refundable tax credit is one that can reduce a taxpayer’s tax liability below zero, leading to a refund. So it’s important that all residents of Ontario who meet the age criteria file a tax return if they use public transit and meet the specific

criteria for the qualifying expenditures that are discussed below.

As important: each taxpayer must claim their own credit, so in the case of a couple, each must file to get a refund, which is quite lucrative. As the Ontario version of this credit was available starting in July 2017, it’s a good idea to review whether taxpayers filed correctly last year.

Eligible expenses include transit services operated by either the provincial or municipal government or by a private operator operating for the government. You can also claim trips to and from Canada, such as trips from Windsor to Detroit.

It’s important to note that services offered by private companies, such as Greyhound buses for short routes, and long haul services like Via Rail are not eligible. It really makes one wonder why that would be so, but no explanation is offered.

Cash fare paid in a fare box for a single ride is eligible for the tax credit only if it was used to pay for specialized transit service. There is a whole host of other criteria that you can find on the Ontario site.

Refundable tax credits are important for everyone, but especially low income earners. This credit, together with the new Climate Action Incentive available for the first time on the 2018 return for filers in Ontario, Saskatchewan, Manitoba and New Brunswick, can inspire early tax filing this tax season.

Additional educational resources: Get up to speed on the latest changes affecting personal income tax filings by taking the Personal Tax Filing and Planning certificate course, or get your DFA – Tax Services Specialist™ credentials by taking the full designation.