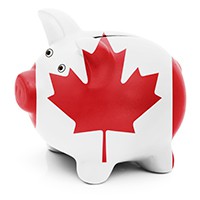 Canada has been in a strong economic position since 2015, but dark clouds are on the horizon as global economic growth has peaked and deficits are expected to grow. This is what Finance Minister Morneau faces as he unveiled his November 21 Fall Economic Report.

Canada’s economic growth has averaged close to 2.5% since the end of 2015 and in the last three years, the unemployment rate has fallen to 5.8%, the lowest level in 40 years, which has brought with it strong wage growth. As a result, budgetary 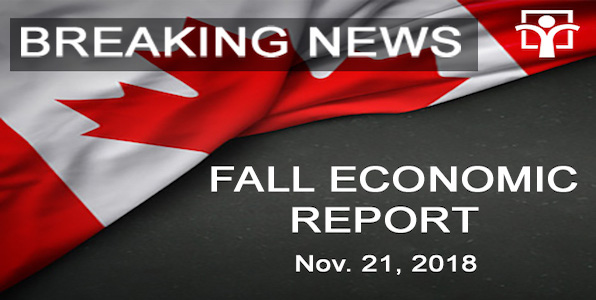 Personal income tax revenues, which still are the largest line item for government intake, are projected to increase by 5.4% or $8.3 billion in 2018-2019, which bring revenues from this source up to $161.9 billion, rising by 4.3% annually over the rest of the forecast period “reflecting the progressive nature of the income tax system combined with projected real income gains.”

Corporate taxes are projected to increase as well, by $1.7 billion or 3.5% to $49.5 billion in 2018–19. After which they are projected to decline in 2019–20 by 7.6%, as a result of new tax measures introduced with this report. Following this and over the remainder of the projection period, corporate  tax revenues will grow again by an average annual rate of 3.9%.

On the negative side, the Fall Economic Report reveals that real GDP growth has averaged slightly less than 2% since mid-2017, and it is expected to change from a 2.0% real GDP growth rate for 2018-2019. It will drop to 1.8% over the 5-year period in the report, unchanged from the February 27, 2018 budget.

On the upside, the government suggests that household spending and business investment in Canada going forward may be stronger than expected. Especially in light of the current tight labour market conditions. But there are many downside risks that still apply.

The U.S. economy could overheat due to recent significant fiscal stimulus. This in turn could induce the Federal Reserve to increase interest rates faster than markets expect. Should that happen, economic activity in the U.S. could also slow, leading to global financial turbulence driven by higher interest rates and a stronger U.S. dollar. Economic protectionism could also dampen global trading activity, which could affect the Canadian economy.

In reading the fine details of the report, there are some disturbing trends. Exports of non-energy goods, which represent roughly two-thirds of Canada’s goods export volumes have continued to perform below expectations, and have remained largely unchanged for more than a decade.

Meanwhile, Canada’s share of goods exports going to emerging economies is the lowest amongst its peers; indicative of our close trading relationship with the U.S. and what the report calls “the intense and growing global competition for growth opportunities abroad.” In short, Canada must step up to serve the growing needs of emerging economies and reduce its reliance on the U.S.

The report also makes a pitch for the oil transportation by pipeline rather than by rail. “Canadian companies are not getting a fair price for their exports. . . . pipeline transportation constraints in Western Canada means that an increasing amount of Canadian oil is being transported by rail, a development (which) has contributed to a higher discount on the Canadian price of crude oil since the end of 2017.”

Canadian crude oil prices are also vulnerable to developments in the U.S., such as increases in U.S. production, and pipeline and refinery shutdowns in the U.S. These have recently contributed to market prices for Western Canada crude oil declining to historic lows, while world benchmark oil prices remain well above those observed in 2016. The result has been a significant loss in income for Canadian oil producers.

It all means that turbulence is ahead for Canadians, who must continue to navigate a continued and challenging global economic environment and its effects on after-tax wealth accumulation.

Following is the updated Economic, Fiscal and Revenue Outlook for Canada, adjusted from the February 27, 2018 budget. As per the Fall Economic Report, Finance Canada November 21, 2018.

Note: Totals may not add due to rounding.
*A negative number implies a deterioration in the budgetary balance (lower revenues or higher spending). A positive number implies an improvement in the budgetary balance (higher revenues or lower spending).
** Budget 2018 budgetary balance has been restated based on the change to the discount rate methodology for unfunded pension benefit obligations, described in the Annual Financial Report of the Government of Canada—2017–2018
*** Table A1.7 in the Fall Economic Report provides a detailed list of policy actions since Budget 2018.

Notes: Totals may not add due to rounding.

Additional educational resources: CE Summits – the January Advanced Tax Update. You’ll engage in a thorough review of the most recent tax changes and opportunities for saving your clients money on their personal tax returns. Register before December 15!