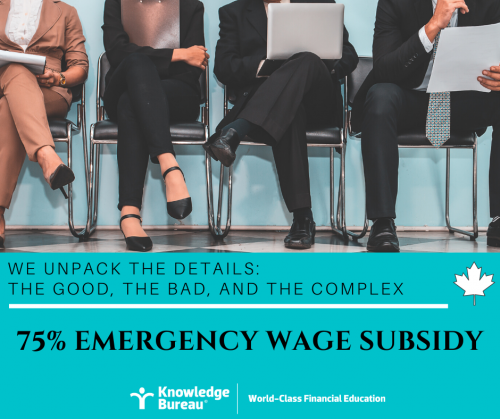 The distance from Friday to Wednesday can seem like an eternity when hope hangs on the promise of a 75% wage subsidy. The details were finally announced on April 1, which we are sharing today. But the euphoric moment is somewhat muted as the fine print includes uncertainty, complexity and the reality that money will not flow for six weeks. This may be devastating for businesses trying to avoid bankruptcy at this critical time.

But as the pandemic’s path sped towards Canada, several more measures were quickly developed including a 10% wage subsidy announced on March 18; the $2000 Canada Emergency Response Benefit announced on March 25 for individuals who have lost their source of income due to the pandemic; and now the 75% wage subsidy. The provisions all interact with one another, together with additional provisions under the Employment Insurance regime. It’s why tax and financial advisors can truly add value to help their clients sort it all out.

Wage Subsidy Support for Employers . Whether employees stay on, are terminated or laid off in April will now be impacted by two new wage subsidy provisions:

The 75% Canada Emergency Wage Subsidy: For employers who suffer a decline in revenues of 30% or more over the same time period as last year, a wage subsidy for up to 12-weeks from March 15, 2020 – June 6, 2020 may be applied for through CRA’s My Business Account portal. There will also be a web-based application, but at the time of writing the application details were not available but were promised “shortly”.

The subsidy covers 75% of wages paid to new employees and 100% of the first 75% of remuneration paid to existing employees. A maximum of $847 per week or 75% of pre-crisis weekly remuneration (whichever is less) will apply. Business must re-apply for the subsidy monthly and may access funding over three eligibility periods, provided that there was a decline in revenues of 30% or more:

Note that employers who are eligible for both the 10% payroll reduction provision and the 75% wage subsidy will need to make an adjustment. The 75% wage subsidy will have to be reduced by the 10% payroll reduction. The paperwork on this should be interesting, but the government has already warned there will be strictly enforced compliance. The 75% subsidy will have to be repaid if employers don’t meet eligibility requirements and face penalties if they don’t pay their employees the amounts received from the government. New anti-abuse rules and offenses for providing false or misleading information or misuse of funds will include fines and/or imprisonment.

In addition, the employer cannot claim the 75% subsidy for any compensation paid to an employee in a week that falls within a 4-week period in which the employee is eligible to receive the Canadian Emergency Response Benefit due to a layoff or job termination.

The goal is to encourage employer (including those currently shut down once deemed non-essential in many provinces) to rehire laid off employees now, whether their business is currently operational or not in order to provide job security, and quickly resume operations for the benefit of the economy.

The 10% Temporary Wage Subsidy for Employers : A payroll remittance reduction of 10% of wages paid March 18 to June 19 (3 months), up to $1375 per employee or $25,000 per employer. The first of such relief will occur with the April 15 remittance. This subsidy will be available to eligible employers regardless of revenue loss and it is taxable.

Claim the reduction against the income tax remittances owing to CRA. The wage subsidy cannot offset the Canada Pension Plan (CPP) contributions, and Employment Insurance (EI) premiums. If income tax remittances are fully offset by the value of the subsidy, future payroll remittances can be reduced by the excess even if they fall outside the application period, which ends June 19, 2020.

Keep all documentation to back up the claims, including:

In addition, these provisions will reduce the burden on the $2000 Canadian Emergency Response Benefit (CERB) as any employees working for businesses making use of this subsidy will not be eligible for the program once it is launched. The government is also encouraging employers to top up employee wages by covering the remaining 25% of employee salaries if they are able to do so.

As mentioned, there’s just one important challenge: these funds will not be available for another 6-weeks (approximately) and employers will still need to demonstrate that they’re paying employees up to the $847 limit covered by the government, which will then be recouped through businesses’ CRA accounts. There will be a big transition period for the million Canadian workers who have already applied for EI, and businesses still need to get through the weeds of the subsidy application process as their revenues drop in the weeks of shutdowns to come and rent and wages are payable anyways.

Additional educational resources : Have some downtime to study online? Become an MFA™-Business Services Specialist today, and provide small businesses the help and guidance they require during the pandemic.