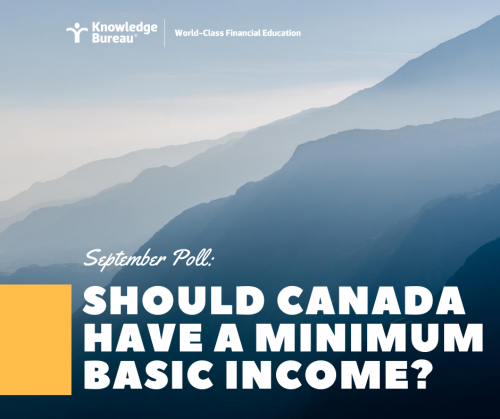 Minimum Basic Income: Is it Right for the Times?

Income inequality has been a topic of discussion for decades.  Now, with the pandemic as the catalyst, the advent of the CERB and future income uncertainty have brought this issue and a broader one – the right to a basic minimum income – some increased momentum.  There may be a simpler solution to help people immediately, and at the same time remove the controversy around incentives to work.

That is, to remove low income households from the tax rolls completely.It’s a thought that occurred to me after rereading an American paper by The Centre on Budget and Policy Priorities, which looked at the historical trends in income inequality and household wealth over six prior decades.  A quick summary follows:

Income inequality.  The authors of this study found that income inequality is exasperated in periods of slow economic growth like we are experiencing today. But in rapid growth periods, something interesting happened. Looking to history:

It is therefore worrisome that in the current economic malaise, the income gap may widen again. Yet how is income measured for these purposes? This is where things get complicated.

The income measure used in Census and IRS data is an important one for analyzing income inequality and basic minimum income requirements.  Income (salary, wages, dividends, self-employment, rental, child support, alimony, disability and unemployment benefits, social assistance, pension and other retirement income) for these purposes is measured before taxes, and but it generally does not adjust for the size and composition of households.

That’s an important observation: larger families need more total income, but less income per capita than smaller families, because they can share resources.

Household income is a better measure. While in the US there is joint tax filing, in Canada, the income is taxed on an individual basis, except for the purposes of income redistribution in the form of refundable tax credits, which look at family net income.

There are, in fact, millions of people who file tax returns but report no taxable income. In Canada they file in order to receive non-taxable refundable tax credits like the Canada Child Benefit or the GST/HST credit.  In the US non-taxable, non-cash income sources, like nutrition assistance and employer-paid health care benefits are not included in income.

The point to consider is this:  to make an informed decision about the level of support to be provided under a basic minimum income analysis, it is critical to take into account the distribution of

income amongst non-tax filers and those receiving non-taxable sources of income. It is something that high-profile studies like those done by Piketty-Saez on Income Concentration don’t take into account.

It is also important note that low- and middle-income earners in Canada pay marginally more tax than those at the highest income levels.  That’s because for every increased dollar the family earns over low income ceilings set by government for the purposes of receiving refundable tax credits and other social benefits, there is a clawback. When you combine that with increasing tax rate as income grows, the tax recovery can be over 70% in some cases.

This is complex and therefore not fair; and not well understood in most households.  Those that do understand the dynamic often consider it a disincentive to work more or harder; for some, it’s also a tax on improving oneself.

Can a basic minimum income work in Canada? Possibly. However, likely all the existing social benefits, refundable tax credits and assistance programs would have to be dismantled as a starting point.  On the good news side, this would certainly simplify the tax system significantly.

A simpler way to put more money into working peoples’ pockets sooner while keeping the incentive to work hard, and improve oneself?  Take low income households off the tax rolls completely to stop taxing non-discretionary income used for food, clothing and shelter.  We could do this by doubling the basic personal amount to $30,000 per individual or $60,000 per household.

Is this likely to happen? Unfortunately, not anytime soon. In the last federal budget, the government has recently doomed the BPA to significant complexity, few laypeople will understand. As per the CRA website:

For individuals whose net income for the year is less than or equal to the amount at which the 29% tax bracket begins ($150,473 for 2020), the basic personal amount will increase to

For individuals whose net income is greater than the amount at which the 29% tax bracket begins ($150,473 for 2020), the increase in the basic personal amount will gradually phase out so that the basic personal amount for individuals whose income is greater than the next tax bracket threshold ($214,368 for 2020), remains unchanged ($12,298 for 2020) and will continue to be indexed.

What’s your take?  Please participate in this month’s poll.  The question we are asking appears below and the vote so far is a close one: “Should Canada have a minimum Basic Income in place for all Canadians?”

Some of the interesting comments so far:

From Holly Atwood on September 09, 2020:  “Who is paying for this? The government does not have its own money. This will diminish the tax pool forcing the remaining hardworking Canadians to foot the bill with increased taxes. I was a single mother, earning a salary of approximately $50,000. That income level was enough to not qualify for government benefits like the child tax benefit or an income tax refund. Those on welfare with child tax benefit and other government credits had more cash in their pockets at the end of the year.

I would like to see every source of income taxed at dollar one and credits given to the vulnerable sectors of the population. I would like to see one school system that guarantees that every Canadian has access to the same educational opportunities whether you live in Attawapiskat or Signal Hill. Instead of funding two sets of administration, more would be available to invest in front line teaching. Same with the police force. Why is there three types of law enforcement and the associated administration. Canadians are bleeding money, now more than ever in a pandemic. We simply cannot think about a basic income at this time.”

From Aileen Krush on September 5, 2020:  Allowing people a basic minimum income that takes away the stress of choosing between paying the rent or feeding the kids allows people to focus on other priorities, like getting training or education so they can find work to support their families on their own. Will some people “take advantage”? Yes. Most times, though, a minimum basic income will be well worth the money spent. (If you want to see an example of a minimum basic income, here is an article about the Mincome experiment in Dauphin, Manitoba in the 1970s https://www.bbc.com/worklife/article/20200624-canadas-forgotten-universal-basic-income-experiment.”

There are so many other interesting comments. . .please take the time to read and participate in this important discussion.

Ibid.  Footnotes 21 and 22. Piketty and Saez treat capital gains slightly differently which results in different estimates of the share of income going to each group studied; they also calculate “market income” differently.